Golf Solitaire is a card game that combines the excitement of golf with the challenging features that everyone comes to expect of an online Solitaire game. The goal in this game is to clear the tableau by combining cards that are one value higher or lower than the previous one. In this sense, it is very similar to Tripeaks Solitaire, minus the tableau disposition that gives name to the latter.

However, the scores play a more important role here than in other Solitaires because they add the “golf” feature to the game. 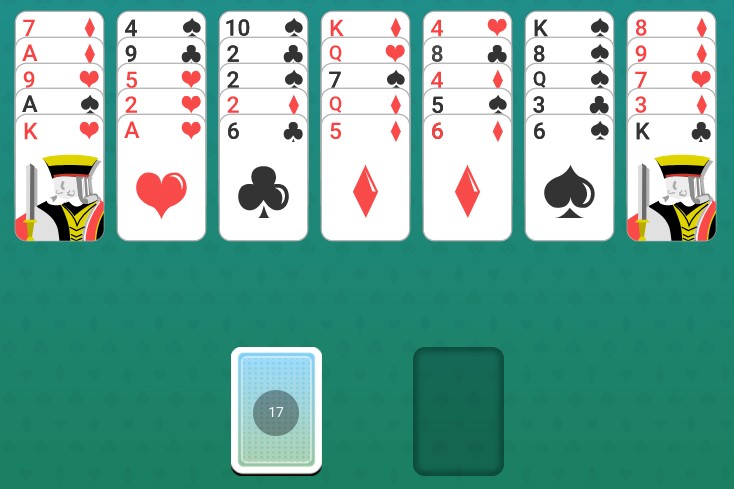 Traditionally, a game of Golf Solitaire uses only one standard 52-card deck. The cards are placed on the tableau to form seven columns with five cards each. The rows must overlap. All the cards are facing forward.

The remaining cards form the stock which must be facing down. The cards collected from the tableau and the stock are grouped into the waste pile. The upper card of this pile must be faceup and works as the base for the next sequence.

How to play Golf Solitaire

The goal in this game is to clear the tableau by collecting all the cards into the waste pile. The cards can only be removed if they are one value higher or lower than the previous one. The order of the cards is as follows: 1-2-3-4-5-6-7-8-9-10-J-Q-K. In the traditional version of Golf Solitaire, the extremities do not fold. This means that a King cannot top the Ace and the Ace cannot top the King.

At the beginning of the game, a card is removed from the stock to start the waste pile. This card will serve as the base for the first sequence. It is only possible to collect the free cards, that is, those that do not have others overlapping them. This means that at the start of the game, only the row closer to the players is available to play.

When there are no more moves left on the tableau, the players can draw a card from the stock to replace the last one on top of the waste pile. The game ends when the stock ends.

There are a few variations to the traditional Golf Solitaire that are introduced to increase or decrease the difficulty of the game.

Three variations stand out in particular:

Locked King - This game option establishes that the King cannot be topped or top another card. This means that it cannot be played onto a Queen and the Ace cannot top it.

Head Start - Instead of drawing a card from the stock to start the waste pile and the game, no card is drawn and the players can choose a free card from the tableau to start.

In this online Golf Solitaire, the players can try out these variations and turn them on or off using the settings menu.

The scoring in Golf Solitaire is inspired by the sport with the same name. The players are supposed to play 9 rounds (holes).

At the end of each round, the cards that remain on the tableau add 1 point each to the overall score of the player. If the tableau is cleared, each card remaining on the stock is worth -1 point.

After the 9 rounds, a score of 45 or lower is par, while a score of zero or negative is considered perfect.

Count the deuces and the Queens

More than a tip to win at Golf Solitaire, counting the deuces and the queens is fundamental to completing the game.

If you see 3 or 4 cards of each in the tableau, then you need to plan more carefully than ever your strategy.

For example, if you have a king on the tableau as well as the 4 queens, you need to make sure that you will reach the king while saving at least one queen. If you remove all the queens using the jacks in your attempt to go through the tableau quickly, you will not have any left to remove the king and you will never be able to clear all the cards.

Ideally, you should avoid using the stock as much as possible so you have more options available towards the end of the game when there are fewer cards to combine on the tableau.

To do it, the best strategy is to try to build longer sequences by alternating between going up and down.

Pay attention to the cards that you can free

When trying to build long sequences, you should also pay attention to the options that will become available once you remove certain cards. This is particularly important when you can see that a sequence is about to break and there are two cards with the same value available.

Empty stacks are not valuable

Unlike most Solitaire games in which having an empty pile on the tableau can be a great advantage, in Golf Solitaire they have no role to play since you cannot fill them with any cards.

Therefore, when you have the option to free a card or empty a pile, you should always choose the first option. Freeing a card will increase your chances of building more sequences while freeing a stack will not make you progress in the game.