Solitaire is one of the most popular card games in the world. Young and old alike can appreciate the peacefulness this game provides, so suitable when it comes to clearing their minds and winding down in a moment of stress.

In reality, the name Solitaire does not refer to a specific game. There are several variants included in this category, some of which share nothing with the others except for the use of cards to play them.

Nevertheless, whenever Solitaire is mentioned everyone immediately thinks about one variant: the Klondike. This is the game that became so widespread thanks to its inclusion in Windows 3.0 back in 1990 and that has since turned into a symbol of procrastination at work, thanks to its popularity among office workers.

The Solitaire Klondike itself has two game modes, depending on how the cards on the Stock pile are dealt:

The Klondike by Threes is the difficult mode of the game, as it prevents the players from using all the cards in the Stock pile in one go.

Solitaire, also known as Patience in many countries, is a single-player card game. Despite its many variants depending on the disposition of the cards on the tableau, the goal is always to organize and collect the cards in a set order in as few moves as possible and in the quickest time. It is also possible for more players to engage in the game with each taking turns making a move or through a competition to find who can solve the tableau more efficiently.

The origins of Solitaire are still a source of debate among historians with many pointing to 19th century France and Germany while others believe its emergence is linked to the spread of the art of divination in Eastern Europe.

Regardless of its birthplace, the most well-known version of the game, Klondike, is said to have appeared by the end of the 19th century in Canada, in the gold rush region of Klondike. Gold prospectors in the area are rumored to have created it and/or popularize it.

Despite being highly popular ever since the Solitaire Klondike only reached the masses on a large scale after it was included in Microsoft’s Windows 3.0 in 1990. At the dawn of personal computers, the company saw in its simplicity a fun opportunity to help users get acquainted with the movements and mechanics of the mouse.

Free from the hassle of shuffling and dealing the cards at each new game, the computerized Solitaire Klondike became a resounding success. 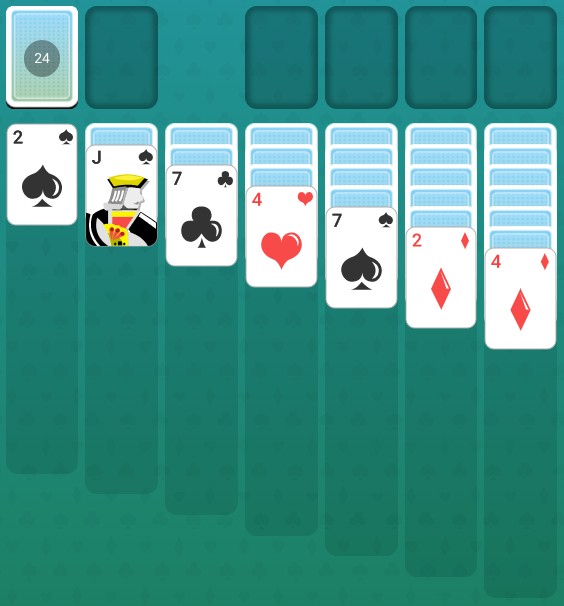 In a game of Solitaire Klondike, the tableau is divided into 4 main areas: the Piles, the Stock, the Waste (discarded cards from the Stock), and the Foundations.

The goal is to move all the cards in the tableau to the four foundations (1 per suite). The foundations are built in a set order, starting with the Aces and ending with the Kings.

On the tableau, there are 7 piles of cards. Only the upper card of each is revealed, with the others facing down. The player must move the upper cards to reveal the ones immediately below them.

The player can do this in two ways: by moving the cards directly to the foundation when the sequence allows it or by transferring the cards to other piles in a sequence of alternating colors and descending order (from King to Ace).

Full or partial sequences are moveable within the piles. Only the upper cards on each pile can be moved to the foundations. An empty space in the tableau may only be filled with Kings.

The Stock pile contains the remaining cards not displayed in the tableau. The cards are facing down. The player can go through it to find the needed cards to build a pile sequence or to build up the foundations.

The Stock reveals one card at a time (Classic Solitaire Klondike) or three cards, for a more challenging game. In this last case, the player can only move the upper cards out of the three revealed. The others only become available by transferring the uppers to the tableau or the foundations.

1. Turn the first Stock card right at the beginning of the game

By revealing this card from the start, the player will have more information displayed on the tableau and will be able to better evaluate the necessary moves to progress in the game.

Plus, turning the first card does not result in any loss of points.

When playing a Solitaire game, the player should always prioritize the resolution of the piles displayed in the tableau. The unknown and unavailable cards are the key to unlocking the Foundations’ sequence to win the game.

The Stock pile should be used only to progress in the game. Otherwise, it may prevent further moves later in the game because those spots are already “filled”.

Many Solitaire strategy tips revolve around the concept of “Return on Investment”. According to this, the players should delay their moves as much as possible to collect higher gains later in the game.

In simple terms, it means that if a move does not reveal a card or has an immediate impact in the game structure, it should be put on hold. That card or the place it would occupy might be needed later to progress in the game.

4. Wait before moving a card to the Foundation

It is very tempting to move a card to the Foundation as soon as the sequence allows it. However, it may be useful to delay this transfer as much as possible.

The card in question may be needed later to build a sequence and reveal the hidden cards in a pile. If the Stock pile does not have its equivalent in a different suit the game may be locked and lost.

Only Kings can be moved into empty piles. Unless there is a King available and it is blocking a hidden card, there is no reason for the player to empty a pile slot on the tableau.
Besides increasing the moves needed to finish the game, the player may also be creating sequences that will later prevent the transfer of important cards.

6. Send the Aces and Deuces directly to the foundation

It is not possible to build a sequence over aces and deuces as they are the lowest levels on the piles descending sequences. They are, however, the base cards for the Foundations.

Therefore, there is no gain in keeping them in the tableau and the most efficient way to deal with these cards is to send them directly and as soon as possible to the Foundation.

7. Try to memorize the Stock pile

Every time the players go through the complete Stock pile, they lose 100 points. Therefore, trying to memorize as many cards as possible on the first go can be very useful.

With that information in mind, the players can better plan the sequences and moves on the tableau and avoid losing precious points by using the Stock aimlessly.

8. Avoid transferring cards directly from the Stock to the Foundations to earn more points

This strategy tip is useful for players who want to complete the game with as many points as possible.

The logic behind it is simple. The reward for transferring any card to the Foundation is 10 points while moving a card from the Stock pile into the tableau rewards 5 points.

Therefore, if the player moves the card into the tableau first and then into the Foundation the total rewards will be 15 points.

9. Try to move way for a king when available

It is only possible to move a King to the Foundation or an empty space on the tableau. Thus, the only way to unveil a hidden card below a King on a pile is by taking one of these actions.

As such, whenever a king becomes available on the tableau a good strategy tip is to focus on making way for it and plan the following moves with that in mind. Otherwise, the King will be blocking a pile.

10. Increase your chances with the Undo button

If there are two cards with the same value available on the tableau, it is possible to test transferring each of them by using the Undo button. In this way, the player can find out which cards each of them unveils and choose the one that provides the best chance to progress in the game.

We want to offer users the opportunity to comfortably play their favorite card games online. We are not trying to reinvent the wheel. We want to remain faithful to the true essence of the solitaire games, keeping them as close as possible to the versions and gameplay that everyone already knows and loves. Our goal is to offer free online solitaire games and apps with a clean, straightforward design and a simple interface that makes them simple to use, so users can play their favorite challenges right away without having to navigate through different menus and options.

We hope you enjoy your visit and that you have fun!