Yukon Solitaire is a card game inspired by the traditional Klondike Solitaire, but with significant differences. The goal is the same in both cases, with the players having to build the foundations in ascending order. Likewise, the cards on the tableau can only be moved to top others with one rank higher and in alternating colors. However, this is where the similarities end.

In a game of Yukon, there are very specific and unusual rules to move the cards around the tableau. The display of the tableau itself is also different from that of Klondike since all the cards are laid down in the columns and there is no stockpile. This means that, to some extent, Yukon Solitaire can be a much challenging game because once the players get stuck and they cannot find any available moves, they lose the game. 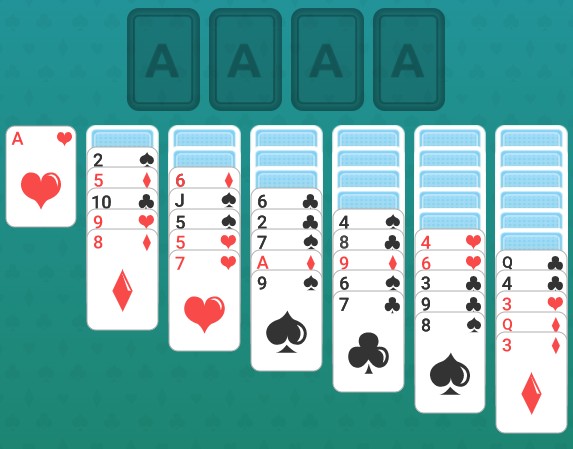 Yukon Solitaire uses a standard 52-card deck. All the cards are positioned in the tableau, forming 7 columns.

The five cards of each column closer to the player are facing up, while those further away are facing down. The exception is the first column which only has one face-up card.

At the top of the tableau are the foundations where the players must organize the cards by suit, starting with the ace and ending with the king. There is no stockpile.

The goal in this game is to build the four foundations by suit, starting with the ace and ending with the king. The cards must be transferred in order to the foundations.

You can only send a card to the foundations when there is no other topping it. Likewise, you can only turn up a card facing down when the path to it is free. This means that you need to move the cards around on the tableau to get to the ones you need.

As with Klondike, you can only place a card on top of another one rank higher and with a different color. For example, you can put a red 2 on top of a black 3. But this is where the similarities end. While on Klondike you can only move cards that are free or sequences, in Yukon Solitaire you can shift full or partial columns around freely as long as you are putting them on top of a free card.

For instance, if you have a column with a black 6 blocked by several other cards and a red 7 without any cards on top of it, you can still move the 6 to the 7. The cards blocking the 6 will tag along and will also be transferred.

Since the cards can only be moved to one with one rank higher, the kings cannot top any other card. They can only be transferred to an empty column/space on the tableau. No other card can fill these spaces.

The players win the game if they successfully build all the foundations and they will lose if they fail to clear the tableau and there are no more movements available.

Do not free the columns if there are no kings available

The kings are the only cards that can fill an empty space on the tableau. Unlike other Solitaire games in which empty spaces are an advantage, in Yukon Solitaire you need to think more strategically about them.

If you do not have a king available to fill the space immediately, getting an unoccupied space will only mean that you will have less room to move around the cards. Remember that you can only move a card to top one that is free. This means that you start the game with 7 possible moves. However, for each column you clear without filling it in, you reduce the number of possible moves you can make.

Clear the aces as soon as possible

Aces are the opposite of kings since they can top a 2 but no other card can go on top of them. Having them around on the tableau is not only useless, but it can also hinder the number of possible moves you can make.

The aces are also the building blocks of the foundations. They are the first card you need to send there in order to start building the needed sequences. The quicker you get them out of the way, the easier it will become to progress in the game.

Focus on uncovering the face-down cards

Having all the cards facing up increases immensely your chances of winning. Once you have the tableau fully revealed, it will be much easier and simpler to start building sequences to reach the cards you need for the foundations.

When looking for possible moves, never lose sight of the top card blocking a face-down one.

For each card there are only two that can top them. For example, a red 7 can only be covered by the two black 6 of the deck.

Imagine that a red seven becomes free and you have the two black 6 available. Instead of randomly moving one, think carefully about the opportunities each will open. For instance, if one of the 6 frees space in the tableau but you do not have a king to fill it, there is no point in moving it. It would be better to leave it there to avoid cluttering the remaining columns to no gain.

Take advantage of the online features

Playing Yukon Solitaire online has many advantages, starting with the fact that you do not need to find a physical space to play it and lose time setting the tableau for each new game.

Another plus of online Yukon Solitaire games is that you can conveniently use a strategy of trial and error. When in doubt about which route to pursue, you can try one out and then simply undo the movements to try the others. In the end, you can just choose the one most profitable.

Although one can argue that it is also possible to do this when playing with real cards, it is undoubtedly more complicated to keep shifting the cards around, not to mention remembering the path one took to be able to revert the game if needed.