FreeCell is a highly popular Solitaire game for its challenging features. You see, although it is estimated that 99% of all the deals are solvable, getting to that solution is no easy feat.

Out of all the Solitaire games, FreeCell is the one that resembles the traditional version (the Klondike) the most. However, it is considered almost as an upgraded version of the latter as it requires more strategic thinking to get to victory.

Its gameplay can be a bit tricky for new players, but once you pick up the rules it is actually very simple and easy to play. 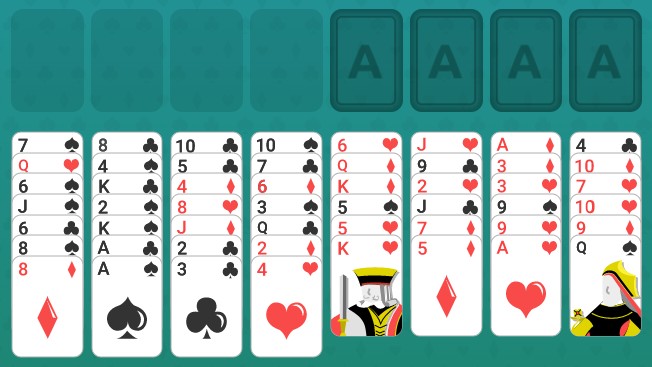 FreeCell Solitaire uses a standard 52-card deck. The goal is to build four foundations (or piles), one per suit, in ascending order. That is, starting with the aces and ending with the kings.

The tableau display is as follows:
- 8 piles containing all the 52 cards, facing forward
- 4 empty slots on the upper right side to build the foundations
- 4 free cells on the upper left side, to store cards during the game.

Only free cards, that is, that are not covered by other cards, can be sent to the foundations. Once a card has been placed there, it can not return to the game. In this FreeCell online game, the cards on the foundations get locked and you cannot even try to move them.

The free cells are the innovative feature of this game, which explains the name of the game. These slots are of extreme importance for two reasons. First, the cards can be temporarily stored in them. And second, the number of slots available can condition the number of cards that players can move.

The free cells can only accommodate one card per slot. Once the slots are full, the players need to return one or more cards to the game to free a slot again.

How to play FreeCell Solitaire

To recap, there are two main rules in FreeCell:
1. You need to build the foundations by suit, in ascending order (ace, deuce, three,..., Jack, Queen, King).
2. You can only move a card to the foundations if it is free, with no other cards on top of it.

Having established this, the most important question is: how can you free the cards you need?

To do it, you need to move the cards around the 8 piles on the tableau. You can do so by building descending sequences, with alternating colors (the suits are not important). For instance, you can put a red 6 on top of a black 7 to free the card that is below the 6.

Or, you can use your free cells and send the red 6 there to free the card below it without having to build a sequence. Yet, remember that you only have four free cells. Once you fill them, you can not use them anymore, unless you free them again by moving the cards into the tableau.

Also, if you find yourself with an empty pile on the tableau, you can fill it with any card.

This is the basic gameplay. You just need to keep building sequences and/or using the free cells to free the cards you need to build the foundations. However, there is something else you need to know about the sequences you build on the piles.

Rules for moving sequences within the piles

Just as in the classic Klondike, in FreeCell you can also move partial sequences that you build within the piles. To use the previous example, you can place the red 6 and the black 7 on top of a red 8… sometimes.

This is the catch of FreeCell. The number of cards (within a sequence) that you can move depends directly on the number of free cells that you have available. So:

This is not a random rule. In fact, you can only move one card at a time. Let’s say you have a sequence of 3 cards that you want to move to a different pile.

If you have two free cells, you can send two cards there, move the bottom one to the pile you want, and then rebuild the sequence by replacing on top of it the two cards you previously sent to the free cells. In the end, because you had two free cells, you were able to move 3 cards, just as mentioned before. You just did it in several steps. With online FreeCell games, you are simply given the shortcut of moving the sequence in one single move, instead of doing it step by step, but the principle is the same.

If all your free cells are taken, then you can only move one card at a time, regardless of if it is in a sequence or not.

Tips and Tricks to win at FreeCell Solitaire

As mentioned before, around 99% of all FreeCell deals are solvable, but that does not mean that the solution is easy to find. This game is so popular precisely because of the level of strategic thinking required to win it. Shuffling the cards randomly within the piles or filling up the free cells too quickly will not do it.

Here are some tips and tricks that might help you:

Plan ahead - examine the tableau to see which moves are possible. Then, check what changes each possible move might entail. Can you do anything with the card that will be free? Will moving the card increase the size of a pile and make it harder to reach an important card below? Be careful, as the obvious move is not always the best one.

Target the aces - aces are the base of each foundation. Until you place them, you cannot progress in the game. Even if they are in a difficult position to reach, that should be your target.

Keep your free cells free for as long as possible - filling the slots will condition the number of cards you can move. This will make it harder to maneuver the sequences and organize the piles. Think of them as a tool to help you apply your strategy rather than an easy shortcut to the card you want.

Try to empty a pile whenever possible - an empty pile is a better alternative to a free cell. Unlike the latter, you can fill with sequences, and using it will not affect the number of cards you can move around. Thus, it can be of great help when it comes to organizing your cards and trying to reach the ones you need for the foundations.

Think carefully before sending a card to the foundations - once a card is in the foundations, it cannot reenter the game. If your foundations are balanced, this should not be a problem. But if you build one faster than the others, you might realize too late that you need some of those cards to progress in the game. For instance, if you build the black foundations too quickly, you might not have enough black cards to move around the reds on the tableau and could lose the game.

The more you play, the easier it will become to spot the right path to reach victory and to plan ahead to get to it. Just give it a try and the rules and tricks will become obvious. Enjoy!