Scorpion Solitaire is a card game inspired by Spider Solitaire. Interestingly enough, they only share two rules: you have to build a complete sequence on the tableau before sending it to the foundations and you can only create sequences in descending order. Everything else is different and designed to make this card game much tougher. So much so, that on average, players only win approximately 5% of the games they play.

The low odds give this game a special appeal. This percentage does not represent the winnable games (games with at least one possible solution). It showcases the difficulty of Scorpion Solitaire and works as a motivator to improve one's strategies. 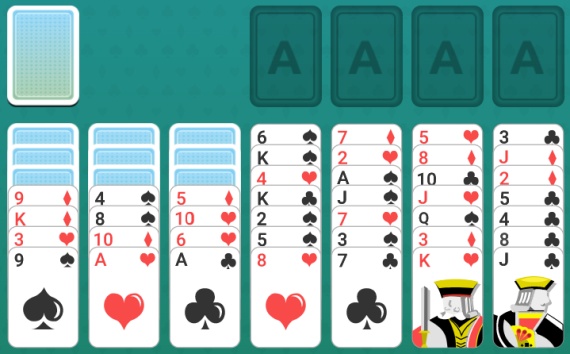 Scorpion Solitaire uses a standard 52-card deck. Out of these, three are removed and placed face down on the tableau to serve as the stockpile. The remaining cards are set on the tableau to form 7 columns with 7 cards each. All the cards are facing up, except on the first three columns starting from the left which have the three cards furthest from the player face down. In this online Scorpion Solitaire, the tableau will be set automatically at each new game.

The goal of the game is to build the 4 foundations by suit. Similar to Solitaire Spider, only complete sequences can be sent to the foundations, not single cards.

The sequences must be built on the tableau in descending order (starting with the King and ending with the Ace), and by suit.

To create the needed sequences on the tableau, the players have to shift the cards between the columns. It is possible to move any card face up on the tableau, regardless of its position within the column. However, a card can only be moved to top a free one (no other card on top of it) and that is one rank higher and from the same suit. If the card being moved has others on top of it, they will follow to the new position.

For example, if you have a free 2 and an Ace in another column topped by a 6 and a 7, these last two will accompany the Ace when you move it to the 2.

Empty spaces on the tableau can only be filled with Kings. A complete sequence can only be moved to the foundations if the King is the first card on the top of the column. This means that the Kings will always have to fill an empty space unless they already start in that position at the beginning of the game.

The stockpile is one-use only. It will add the three cards to the first three columns on the left of the tableau.

Tips to win at Scorpion Solitaire

Check if the game is winnable

To avoid losing time, start by analyzing the cards on the tableau to check if there is a sequence of cards that would make it impossible to win the game.

For example, if you see the 7 of spades directly covered by the 5 and the 6 of spades in this order, you know that the game is not winnable. To move the 6 to the 7 you would need to get rid of the 5 in between, but this could only go on top of the 6 that it is covering it.

Focus on turning up the cards facing down
Getting all the cards face-up on the tableau will significantly increase your chances of winning. It will give you a better perception of the moves you have available as well as if the game is winnable or not.

Some players also prefer to use the stockpile from the beginning to avoid any sense of uncertainty throughout the game. Others prefer to avoid using it until the very end to avoid cluttering the columns. Choosing one way or the other depends solely on your style of playing.

In Scorpion Solitaire, empty spaces can only be filled with Kings, but sending them there has its pitfalls. Once you get a free space, check to see if moving any of the Kings you have available might unlock other moves and how many. Always choose the one that opens up more options.

However, even then, you should delay moving that King until you have no more movements left. For example, you never know if in the following moves you will turn a card face down and discover a King there blocking that column.

No card can be placed on top of an Ace, so freeing it is not going to help progress in the game. They are always an inconvenience whichever their position, but if you expose one at the end of a column you will be effectively locking that column.

Exposing an Ace will be unavoidable at some point, but try to delay it as much as possible so that you have more options to shift the cards around.