Pyramid Solitaire is a peculiar game that combines fun with a mild exercise of math. As with the great majority of Solitaire games, the goal is to clear the tableau and collect all the cards, but there is a catch to it. Players can only collect two cards at a time, provided their combined value is 13.

The game gets its name from the disposition of the cards on the tableau. 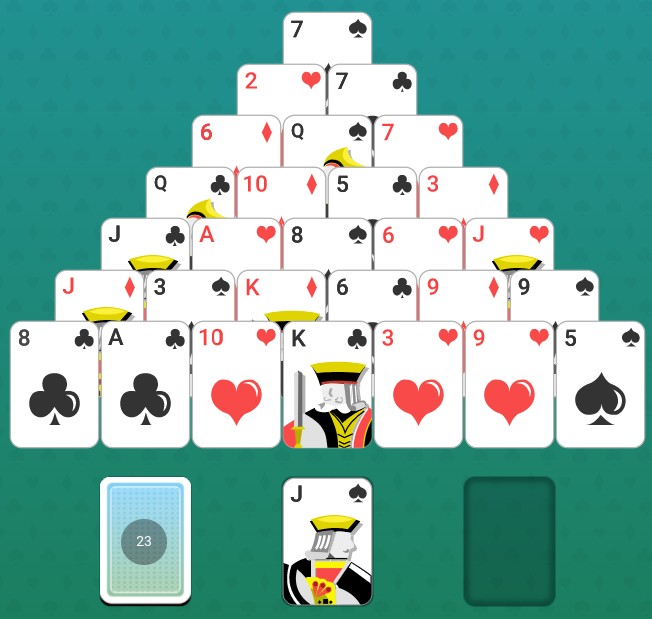 Pyramid Solitaire uses a standard 52-card deck. At the start of the game, 27 of those cards are dealt on the tableau in the shape of a pyramid, with 7 cards making up the base. All cards are facing forward and they must overlap.

The remaining cards are combined to form the stockpile and are placed face down next to the player.

When the players draw a card from this pile, they must place it face forward next to it to create the waste pile. Once the stockpile has been completely transferred to the waste, the players can collect the cards, turn them face down and refill the stockpile once again.

The last area of the game stands to the right of the stock and waste pile: the foundation. This is a reserved space where the players will save the cards they have removed from the pyramid. Once a card has been placed in the foundation, it cannot be retrieved.

The goal in this game is to collect all the cards in the pyramid to clear the tableau. All the cards are facing forward and they overlap. Only the cards that do not have others on top of them can be played.

The players must collect two cards at a time, provided their sum equals 13. The numbered cards have their numerical value. As for the face cards, the king is worth 13, the queen 12, and the jack 11.

It is possible to match cards within the pyramid - as long as they are “free” - or to match them with the waste pile. Once the two cards have been sent to the foundation, they cannot return to the game. The king is the only card that can be sent alone to the foundation.

If there are no more moves available, the players can keep drawing cards from the stockpile and placing them on the waste looking for a possible match.

Tips to win at Pyramid Solitaire

Check the pyramid and your chances of winning

This game only uses one standard 52-card deck, which means you only have four cards of each value available.

Let’s say you have three 4s on the pyramid and they stand atop a 9. This means that you only have one 4 remaining in the stockpile. If you use it to remove another 9 on the pyramid, you can turn the game into one very hard win. You can even make it unwinnable if the 9 is under the 4s on the pyramid.

Likewise, if you have a 10 at the top of the pyramid, for example, and all the cards worth 3 points are also displayed on the tableau, you can immediately see that the game is unwinnable. You can only remove the 10 by matching it with a 3, but you first need to remove all the 3 to get to the 10 - impossible.

Just by looking at the pyramid when you start the game you can already perceive these difficulties and plan your strategy accordingly. As for unwinnable games, this online Pyramid Solitaire is designed to avoid such card dispositions, so you can always have fun playing.

Send the Kings to the foundation right away

The kings can be sent to the foundation by themselves as they are worth 13. Think of them as a “gift”.

This means that there is no reason to keep them around, especially if they are in the pyramid, blocking other cards.

Try to balance the pyramid

Try to remove the cards evenly on both sides of the pyramid to keep its base as wide as possible throughout the game.

The worst outcome that you can get is ending up with a line of overlapped cards. When this happens, you can only remove them by finding specific cards to match each one of them, once at a time. Although it is feasible if they are available in the stockpile, it can be boring.