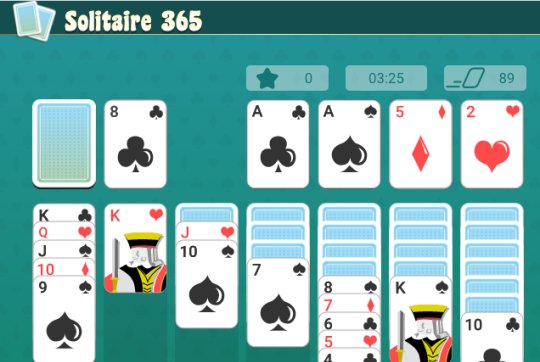 The advantages of playing Solitaire online took the game to a different level when compared to its traditional, physical form of the game. The digital versions of these challenges offer features and options that the physical one could hardly replicate. Most of all, it removed all the hassles of this game and made it more accessible to everyone.

1. It removes the hassle of dealing cards

Solitaire was always a popular game, but there is no denying that it only became a massive hit after being included in the Windows 3.0 software back in the early 90s. It is true that it became more accessible for everyone and much more discrete (bored office workers really appreciated these features) but, most importantly, it removed the hassle of dealing cards at every new game.

Setting up the game physically is a time-consuming task and few people have the time or the patience to play it or to start a new challenge after the first one is completed. With the digital version of Solitaire, be it offline or online, this is no longer an issue.

2. Starting a new game is easy and quick

One of the main advantages of playing Solitaire online is the easiness and quickness it offers when it comes to enjoying a challenge. Playing, replaying, and starting a new game is just one click away. The tableau and the cards are set up automatically and in the blink of an eye.

The player can fully focus on simply enjoying the game without having to worry about the hassle of dealing the cards or setting up the piles on the tableau.

With digital Solitaire games, knowing the rules becomes secondary because the program will enforce them. The player still needs to know the mechanics and structure of the game, but the hassle of noting down the scores and having to check the rules to confirm if a move is possible does not exist anymore.

Plus, cheating becomes very hard, if not impossible. Therefore, when competing with an opponent for the best score and time for a specific puzzle, the player does not need to worry about such trivialities.

4. It is easier to learn the game

Solitaire is a simple casual game, but the description of its rules may look complex. It may be hard to grasp the meaning and function of all the piles, which cards can be moved, which sequences are allowed in each pile or foundation, and so on.

However, because rules are automatically enforced in a game of online Solitaire, it becomes much easier and quicker to learn how to play it.

Through trial and error, the player can clearly see and understand the meaning of ascending and descending sequences, when these must include only one suite or alternate in colors and the importance of the waste pile to progress in the game.

One of the biggest appeals and advantages of playing Solitaire online is the data report these games can provide. However, the type of statistics it provides depends on the game.

Most online games will let players know, at the end of a puzzle, where their score and time stand when compared to other global players. Others can feature the option of having a personal account that lets players track their performance over time.

Regardless of the type of statistics, they help to motivate players and to challenge them to beat their own marks.

Most digital Solitaire games display it in its traditional setup over a green felt. Nevertheless, many also offer the option to customize it so players can make the game more aesthetically appealing to them.

In this case, players may be able to change the tableau into a picture or a different color, choose other back card colors or even pick a different design for the suites.

However, the advantages of playing Solitaire online do not end here. The game itself may also be customizable and the players are able to set a different type of scoring, bypass the timer or choose between the three-turn or one-turn modes.

7. Physical space is not a constraint

With digital Solitaire games, players only need a computer, a Smartphone, or a Tablet and they are free to play anywhere and anytime. Even having an internet connection is no longer a constraint thanks to the many offline apps and software available.

There is no need for a clear and straight surface to be able to play and the hassle of tidying up after a challenge is also removed.

Besides, players can now enjoy a Solitaire game outdoors without having to worry about the weather conditions and if rain or wind may potentially ruin the fun.

Special features are one of the main differentiating advantages of playing Solitaire games online when compared to the traditional physical game. These include the autocomplete and auto finish options, for instance, that send cards directly to the foundations whenever possible or create the foundations’ sequences automatically when all the cards on the tableau are revealed.

A special feature that is often overlooked is the option to restart the game. It is possible to play the same challenge over and over again and try different move combinations to find the most efficient and quickest way to complete that specific game.

In a physical game, repeating a challenge would be an annoyance as players would have to take note of the position of every card at the beginning and keep dealing the cards in the same way, taking care not to make a mistake.

There are only two ways for physical Solitaire games to be interactive. Either players can solve the challenge in a team or a third person has to deal the exact same setup to two or more players for them to compete against each other.

Digital Solitaire games encourage more interactivity between players. Sharing a puzzle is now only one click away and several players can solve the same challenge at their own leisure and then compare the results.

Even non-competing interaction is possible and there are countless online forums where Solitaire aficionados from all over the world come together to share tips, talk about their common interests, and cheer for each other.

10. It is easier to find other similar games

Players who enjoy Solitaire games are more likely to enjoy other types of casual games as well. Since software companies tend to group their games by categories, it is easier for these players to find different challenges they may like, whenever they want to take a break from Solitaire.